More than one year after the post electoral crisis, the terror created by the murders of protestors is still palpable here. Many readers of this blog will be familiar with these killings because you participated last year in an open letter to the families of the victims.

A few days ago Karen Spring wrote this excellent essay on the continued impunity for the killings.

As I mentioned in a previous post, the events of December 2017 & January 2018 are hardly in the past for many Hondurans. These killings were mentioned to me without prompting at some of our site visits, and my general impression both from these weeks on the ground and following social media is of a people where terror has genuinely taken root. I keep thinking of the many histories I’ve read or watched about societies existing under terroristic regimes, and realizing that in this moment I’m visiting one of those societies. And knowing that my friends and others live in it every day.

Nor are these impressions and facts far removed from the United States. Impunity for murdering protestors and the terror it spreads is creating an exodus of people arriving everyday at our border. To say nothing of the direct and indirect support for this terror provided by the US government itself. One example: the US provides funding, training, and “vetting” for various police and military forces implicated in human rights abuses including murder. We are funding terror.

Last weekend I read about immigration lawyers and journalists with US and EU citizenships being denied entry to Mexico. Interpol alerts were placed on their passports because they were involved in assisting the masses of asylum seekers on the US-Mexico border.

We live in times of terror.

There are a lot of people who have to be involved to make a system of terror like this run and keep running. According to the LA Times, it’s highly likely that judges needed to approve the “alerts” be placed on these peoples’ passports. Judges who needed to somehow find it OK to refuse people the right to move across borders because they were assisting others with their human rights; judges who swore to uphold the first amendment and then flagged the passports of journalists. They did not need to participate in this. But that means there were also attorneys who presented the government’s case to the judge. There were people in the courtrooms at the time who have said nothing about this happening, regular people like perhaps a stenographer who have participated in keeping their mouths shut rather than whistle blowing. Even when something happens in judges’ chambers, documents go through a lot of hands.

There are the immigration officers who carried out the orders.

I haven’t even started on the folks carrying out all of this when it comes to the actual asylees, the adults and children who we know have been suffering on our border. I’m talking about the ones participating in the asylum interview bottleneck. The ones turning the locks on the cages. The ones building the cages. The ones actually making money on the cages. There are actually hundreds of thousands of participants in this. It isn’t just Jeff Sessions and Donald Trump, who I think readers of this blog will probably find to be beyond any sense of shame.

I keep thinking of Eichmann organizing those train schedules to make sure all the trains could move everyone around Nazi Germany, and of everyone else involved in running the train system. Bureaucracies are made up in part by individual people and their individual actions, and they are a necessary part of these systems. And while it’s easy to forget, bureaucracies are not faceless.

But I try—I try, because it’s hard–to also think about the forgotten and even intentionally concealed history of everyday resistance that so many people have taken part in throughout history too. I try to hold out hope that we can again find and cultivate those memories, at least among some of ourselves. 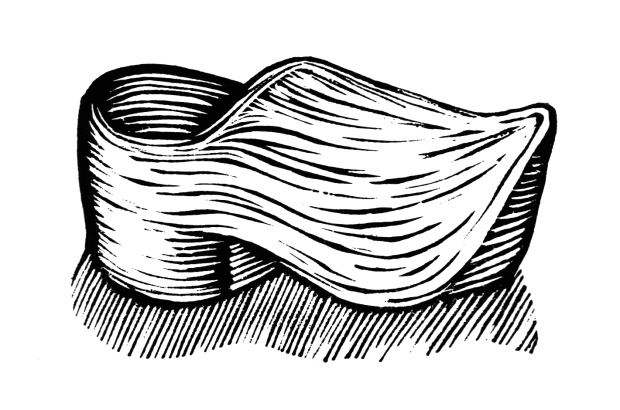 “Slow It All Down” Shaun Slifer – Text and Image from Justseeds: “As an icon of working class history, the story goes that sabots were thrown into early industrial machinery when workers’ demands weren’t met. The term saboter, however, originally referred to the noisy footsteps of clog-clad rural workers, and thus their low-rung, unskilled labor within newly mechanized industrial factories. The word evolved from there to mean the slowing or bungling of a job on purpose: work stoppage.”