The Rebel Prof is honored to present a guest post written by anthropologist and professor Jelena Radović Fanta.

The words that were made by this country’s president on birthright citizenship was a punch in the gut. When I first heard it, it didn’t feel that way. I rolled my eyes, thought “here we go again,” took it with some humor, and then thought, well, many groups of people have been targeted by this government and his rhetoric and his executive orders over the last two years. Surely, I can’t compare this with what my fellow compañerxs have been going through. Because I have privilege and I’ve benefited from it. I’ve flown in and out of this country with my U.S. passport, I don’t need to worry about having a visa, or having a school pick-up or speeding ticket turn into a deportation. Who am I to complain.

But as I went through the day earlier this week, I had a pit feeling in my stomach. I brushed it off thinking is was due to little sleep, the list of things I need to tackle, the shorter days and darker mornings. Until a student asked me “and how are you doing?” And I realize that I had been punched in the stomach. I had a chill on my skin, my walk was slower, and my heart was heavy.

I know the (im)possibilities of this happening. And under the very improbably circumstances that this happens, I have other options. I am married to a U.S. citizen (you know, the more legit kind of citizen) and I am a citizen of another country I can go back to (a country also with birthright citizenship, DJT do your f*** research). If anything, there’s always the employment sponsored visa which I can hope to attain.

But the weeding out of everyone who does not look like or think like Trump continues. We were talking in my classes about the irreversible damage that is being done, where now 45-supporters will turn to people who seem gringo but might have that slight accent, look a little different, speak more than one language, travel back and forth, or simply have a different political viewpoint and say “You! Where are your parents from? Go back to where your parents came from!” 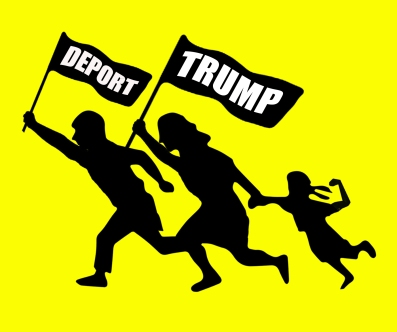 I owe this country nothing. I am not going to list what I consider “accomplishments” that I’ve had in my life. I should not have to. But if we are going to talk about it, well than yes, I have given a lot to this country. And this country has given me a lot. There are many reasons why I am here. And if we are going to talk about immigration, let’s talk about it. If we’re going to talk about crime, let’s talk about crime and how immigrant crime rates are not higher than US born people. If we’re going to talk about social welfare, let’s do so and talk about how undocumented people are not eligible for federal public aid programs. You do not get to throw out half-ass “arguments” and logic that all they do is draw on emotion, on white fragility, on anxiety about the “browning” of this country, and other baseless bullshit “arguments.” All it does is reveal your xenophobia and fear of “other,” who, by the way has never, ever really been an other, but a “right here.” Right here next door neighbor, right here at the food truck, right here landscaping your yards, cleaning your bathrooms. Right here opening doors, driving taxis, caring for your children, educating students, doing your nails, creating art, and start up shops. There has never been an “over there.” The “over there” has only been there because you placed it there. And don’t get me started with the legality of how your grandparents came here. There was no “legal way” back then. People arrived on ships and if they were healthy and part of a support system, in they came.

I had always heard that things don’t really hit you until they become personal. Attacks on Muslims, Undocumented Immigrants, African Americans, the Queer community, and Women are for me offensive, unacceptable, and must be fought. Always. Yet there’s this extra blow when I realized “Hey, he’s talking about me. And my family.” The sting is extra sharp. And it hurts a little more. And I hope that the bitterness and anger I feel will never stop pushing me to do something about it.