Pairs well with: a copy of Edward Said’s Orientalism, the long forbidden episode of the Simpsons where they go to the World Trade Center, and mangoes 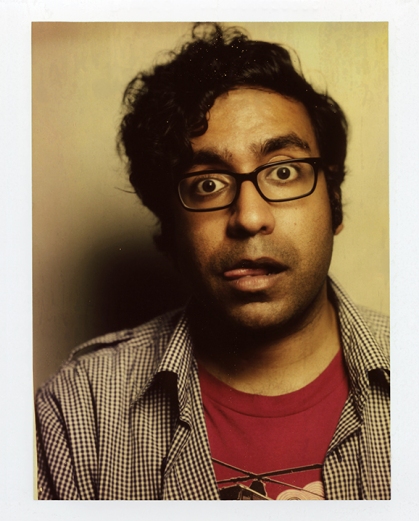 There are a lot of good, politically savvy stand-up specials on Netflix right now. This one was my favorite so far. In part because Kondabolu opens with a 9/11 joke, “in order to show the audience that he means business!” (The joke is hilarious even though I’ve just given away part of the punchline.)

You should watch this special if you really need comic relief right now. (If you don’t need comic relief right now, what kind of monster are you and why are you reading my blog?) You should try watching this special if you don’t think you will like it. Maybe you will. Or maybe you will at least learn something. A perspective like Kondabolu’s is rare on TV and in comedy, and it’s refreshing and eye opening. I felt like an ocean breeze was suddenly bursting through my windows and filling my lungs with air listening to Kondabolu’s direct and political jokes. I can only imagine what South Asian American friends felt like seeing themselves represented in any way on screen. At any rate, warn your relatives. Whiteness makes for a pretty funny joke.

Even the Rain – También la Lluvia

Pairs well with: all the other movies starring Gael García Bernal, a copy of the Open Veins of Latin America, a willingness to reflect on your own positionality in the world

Juan Carlos Aduviri and Gael Garcia Bernal in Even the Rain

And then, as if all of that wasn’t enough to make you go watch it now (but it should be), it’s also a movie starring Gael García Bernal!

Here are some other excellent movies starring Gael García Bernal:

Pairs well with: summer, popcorn, resting up before and after organizing around migration issues

This is a light-hearted show with shockingly good feminist and racial politics. I never feel guilty after watching it (although one downside is that there is a cop  who is a “good guy” character). The show actually has amazing immigration politics, including a plotline that basically showcased Lisa Sun-Hee Park’s research.  Some of the other things I appreciate about it are that one character never speaks English; Jane’s mom is unapologetically sex positive although Jane has a more conservative (titular) approach; the family and show is based in Miami but they are Venezuelan, not Cuban; feminism is sometimes an explicit topic of the show; and it is simply very nice to watch a show that is led by a POC cast and not full of white people. Plus, it’s a very funny show with some smart jokes.

Pairs well with: organic foods, soil-testing kit, and solitary activities once you become unpopular for wanting to make space for the truth and criticizing “Pinktober”

More info on this image at: http://breastcancerconsortium.net/new-york-breast-cancer-network-rebukes-a-perilous-pinkwashing-partnership-between-komen-and-fracking/

This is another documentary based on a book, an academic text by Samantha King who also appears in the documentary. The film covers the problems with reducing fighting breast cancer to buying stuff with pink ribbons on it and includes many of the problems people have with the Komen foundation. More interesting, however, the film is a powerful discussion of the ways that relentlessly positive thinking is really harmful to people. It shows persuasively that when we focus on positive thinking, we center quick and easy solutions and end up missing real solutions, which are harder and take more time. We do not think about what causes cancer (e.g., living near oil refineries), and how more people are getting it. Instead we focus on finding it early on as if it were an inevitable fact.

Most strikingly the film includes interviews with women dying of breast cancer who discuss how there is no room for them or their experiences in a “movement” which only wants to hear happy stories and see pink objects. Where can one process the experience of dying from a horrible disease if people only want to hear about happy things? How can this be a “good” way of dealing with a disease if there is no room for the people actually experiencing its effects in an authentic way?

A great film for understanding how focusing only on the positive can literally harm the people around you.

Pairs well with: plaid suits, elaborate cocktails, a blanket to hide under for the rest of your life, and maybe more cigarettes. Just don’t let your cocktail out of your sight for a moment. 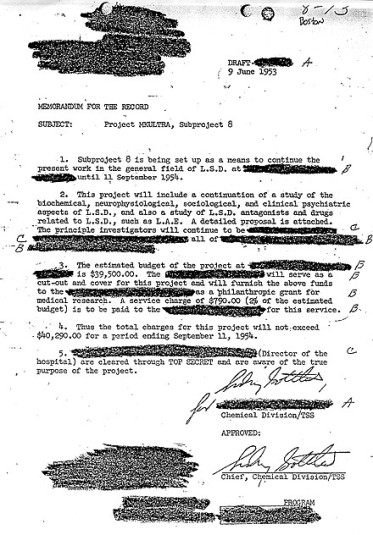 Dr. Sidney Gottlieb’s approval of an MKULTRA subproject on LSD.

Watch it if you feel yourself becoming a little bit sympathetic for the FBI in the Trump era. Although it is about the CIA, this is guaranteed to immunize you from forgetting the darkness of the United States security apparatus and its allegiances.

This docuseries, directed by expert filmmaker and story teller Errol Morris, goes beyond the MKUltra premise that it starts with and gets more and more upsetting, linking the sci-fi mind control premise (although it’s true, not fiction) to contemporary military operations. Much of the series was eye-opening and shocking even for a cynical anarchist who studies Latin America like me.

I believe it is only episode two or three when one of the family’s lawyers describes seeing the “burn bowls” inside of the agency. These instruments were meant for quick and regular document destruction.

You can learn more about Frank Olson (the subject of the documentary) and his son’s ongoing struggle for justice here.

Also recommended: everything Errol Morris has directed, including

(On Saturdays, I’ll be posting recommendations for movies and books and other stuff. Here’s my first.)

I Am Not Your Negro

Best paired with: cigarettes and a typewriter

Not an incredibly unique documentary recommendation,  but if you haven’t yet seen it, see it now. Even if you already know a lot about race and racism, you will probably see something in a different way or appreciate something differently. The film is beautiful and well-made. The argument, which belongs almost entirely to James Baldwin, is interesting and deep. I re-watched it this week and was again amazed at how ahead of his time Baldwin was. Not because he’s saying things that have relevance in 2018 (although that’s true too), but because he seems to have anticipated the late 1960s and the 1970s well in advance: Notes of a Native Son was published in 1955.

The flaws: the film is an intersectionality fail. There are almost no Black women in the movie, although Black women played an extremely large and critical role in the Civil Rights Movement of the 1960s. This is a problematic reflection of how history is told rather than how it was. And although Baldwin is well known to have been queer, it’s downplayed in the film.

Here’s a teaser of Baldwin’s brilliance:

Click for video of Baldwin. (Photo by Allan Warren)