The work of being trans is constant. It is tiring. It is exhausting. And it doesn’t really have to be that way. Is it too much to ask people to pay attention to me as a human being when they interact? To use my pronouns, use my name, and to do both correctly a majority of the time? It is not too much to ask, because how can I keep going in a world where that is too much to ask of the fellow human beings with whom I interact?

Taking people seriously as human beings starts with recognizing and learning how we are referred to in speech. This is not a preference. This is not a special request. This is a normal request for being treated with dignity like a human being and let me tell you, it is hurtful and embarrassing and offensive and infuriating and disempowering all rolled into one when it almost never happens. It is dehumanizing.

Let’s start with the name. I am a white person born in the US; unlike a great many people who must never even hear their names said correctly let alone spelled accurately, I belong to the dominant culture. Even so, my very white Irish German name, Meghan Krausch, is apparently not white bread enough and so I have spent my entire life checking every program, table of contents, and website in which it has ever appeared to see if they got it right. It has not gone well. For this and other reasons, I tried dropping the second half of my first name. But no, people cannot just call me Meg either. They want to try to call me Meghan anyway, usually failing.

Why am I going on about my name? Because I think this is related to people’s issues respecting each others’ pronouns. We insist in imposing our own cognitive schemas on other peoples’ selves. We do not take the time to copy down someone’s name as it is given to us, or to listen when they say it, or look at how they sign their own name. Instead, we are in a rush to fit people into a pre-existing box (in my example: ‘oh! I know that name: Megan’).

I get that there is a social transition. I get that this requires resocialization. And I do in fact understand how deep that socialization goes. I really, really do. In fact, I understand more than most people how early we are socialized to believe in the gender binary; I would argue that we are introduced to the binary before we even leave the womb. I am not sure I even believe that anyone can be perfect at using nonbinary pronouns in a society which is still cissexist.

But it is devastatingly apparent to me that most of y’all don’t even try.

In researching this post, I found this story about nonbinary or genderqueer K-12 teachers who use the honorific Mx. There was a lot that resonated, but thing I identified with most was the teacher who said this:

“I had moments where I thought: I’m too much work, I’m asking too much of my colleagues and students, and that as a teacher I’m there to serve, and part of serving others is not always putting yourself first.”

The work of being trans is constant and exhausting only because other people make it that way. It doesn’t have to be anything other than just being.

Here are some resources for those who have questions about trans pronouns, being good accomplices, and what to do when you screw up: 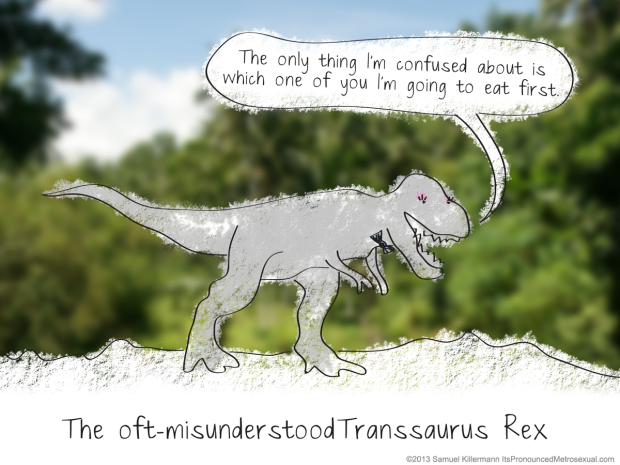 One thought on “Just Call Me They”